Algebraic topology views two spaces as “the same” if they are homotopy equivalent. With this view then, it is interesting to ask: when are two spaces the same, when are they different, and are there ways to quantify how different two spaces are from each other? Now, studying homotopy equivalences directly is very difficult; for instance, to show two spaces are not homotopy equivalent, you need to show that there are absolutely no homotopy equivalences between the two spaces. And to show two spaces are homotopy equivalent you need to conjure up two continuous maps and two homotopies, and unfortunately there is no systematic way to construct this. Thus, a common method of attack for the types of questions posed above is to create algebraic invariants of spaces, and investigate those, linking them back to interesting properties of the spaces. The term invariant is used because we want these properties to be homotopy invariant; that is, if we construct a property $P$ for a space $X$, being homotopy invariant means that for any space $Y$ that is homotopy equivalent to $X$, the property $P$ for $Y$ is the same as the property $P$ for $X$. Homology is such a property. Homology also happens to have a nice intuitive explanation behind it as well. Unfortunately, homology is a bit cumbersome to define in total generality. So we will focus on a very common and useful class of topological spaces called simplicial complexes. These are spaces that are built out of simple components, and the homology can be much more easily computed.

Simplexes are the building blocks for simplicial complexes. Simplexes can be thought of a generalizations of a triangle to any non-negative integer dimension. The standard $k$-simplex (or just the $k$-simplex) is defined by the collection of points

In the image below, the first two orientations on the $2$-simplex are considered the same, while, the third is not.

We define an orientation of a simplicial complex $S$ to be an ordering of the $0$-simplexes contained in $S$. Two orientations are considered the same if they differ by an even permutation. Then each simplex in $S$ inherits an orientation from the orientation given on $S$.

With this notation, $C_k$ forms an abelian group with addition operation given by

It turns out there are maps $\partial_k: C_{k} \rightarrow C_{k-1}$, which send a simplex to a linear combination of its faces. These maps turn out to be very useful.

where the oriented $k$-1 simplex

For the simplicial complex above, we can represent the map $\partial_1$ as the matrix 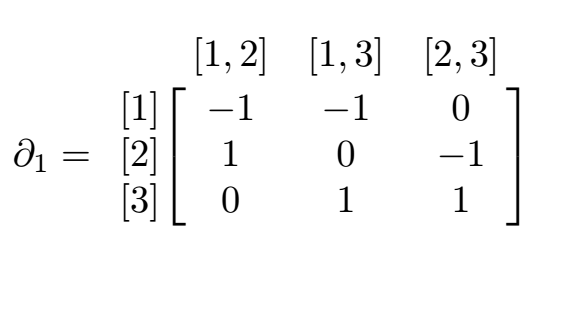 These maps give what is called a chain complex:

One important relation for a chain complex is that

for all $k$. We will interpret this a bit more below.

For the simplicial complex above, we have

For the simplicial complex above, we have

For an oriented simplicial complex $S$, we can now define the $k^{th}$ homology group as the quotient group 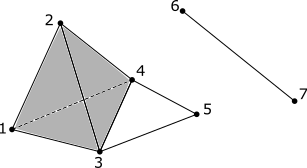 $H_0(S)$ should count the connected components of $S$, which is $2$; let’s see how. Here is the relevant portion of the chain complex:

Now we can see that

We can see that this only multiples of this element are sent to zero by $\partial_2$. So $Ker(\partial_2) = H_2(S)$ is generated by this single element; thus representing a single $2$-dimensional hole in $S$.

In the next section we will go over a more algorithmic way to calculate the homology groups. Hopefully this section, although lengthy, has shed some light on what is going on and why the $k^{th}$ homology group represents the number of $k$-dimensional holes in the simplicial complex. In fact, there is a little bit more going on than just counting; we will get into that a little below.

Now we can see that if we take the matrix representations of $\partial_k$ and $\partial_{k+1}$ we can compute the $k^{th}$ homology group $H_k$ using the above proposition.

Example Let’s use our example simplicial complex from before to compute using Smith normal form. We will only compute $H_0(S)$ as the others are so similar as to not be helpful going through all of them.

We will not go into how to compute the Smith normal form here, but simply give the decomposition of this matrix:

This lines up with our earlier computation of $H_0(S)$.

This last example is of the Klein Bottle. It won’t be much as an example as an exercise. It is one whose $1^{st}$ homology group has torsion; i.e. it is not just copies of the integers. Below is a depiction of a simplicial complex structure for the Klein bottle. Let’s call this $K$. Here all the triangles are filled-in $2$-cells. 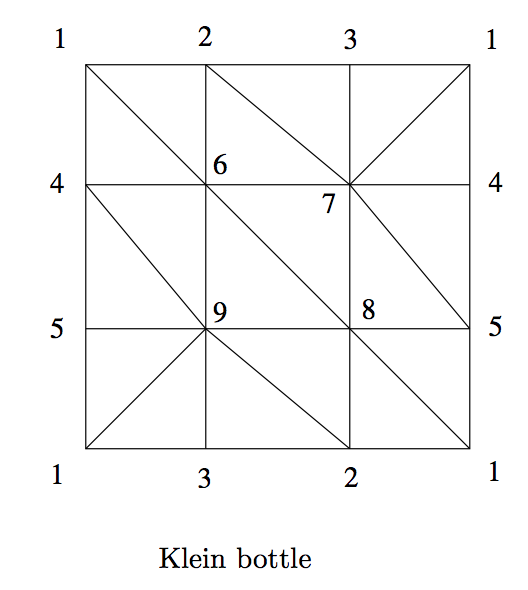 The above image is taken from the pdf of this project. The upshot will be that the first homology group of the Klein bottle will be

We have seen the construction of homology groups, learned a bit about their interpretation and utility for studying topological spaces. We have also seen examples and methods for algorithmic computation of the homology groups given a simplicial complex structure, as well as some sample code you can use to get your feet wet with computing homology yourself!